Ludwig von Mises always held the opinion that gold is a good like any other. It differs only in terms of one important characteristic: money is the generally accepted medium of exchange, because it is the most liquid good. According to Mises, its role as a medium of exchange is therefore its crucial characteristic, while its function as a store of value and unit of account are only subsidiary features. This implies also that a rising money supply must lower the exchange value of money.[1]

Supply and demand thus determine not only the prices of goods and services, but also the price of money, resp. its purchasing power. Confidence in the current and future purchasing power of money depends decisively on how much money is in existence currently, but also on expectations regarding the future supply of money. The more money is supplied – relative to the goods and services offered – the more its value declines.

This can also be seen in the following chart. In 1913 the population of the US stood at 97 million people. The money supply M3 at the time amounted to approximately USD 20 billion, i.e., USD 210 per capita. Currently the population stands at 317 million people, while the money supply M3 has risen to USD 17.26 trillion.[2] The per capita supply of money thus amounts to USD 54,366.

The next chart illustrates that the global stock of gold per capita since the beginning of the 20th century is fluctuating in a fairly tight range of 0.6 to 0.85 ounces. This is remarkable, as the global population has exploded from 1.65bn people in 1900 to some 7bn people today.

Gold stock in tons vs. gold per capita (ounces) since 1900 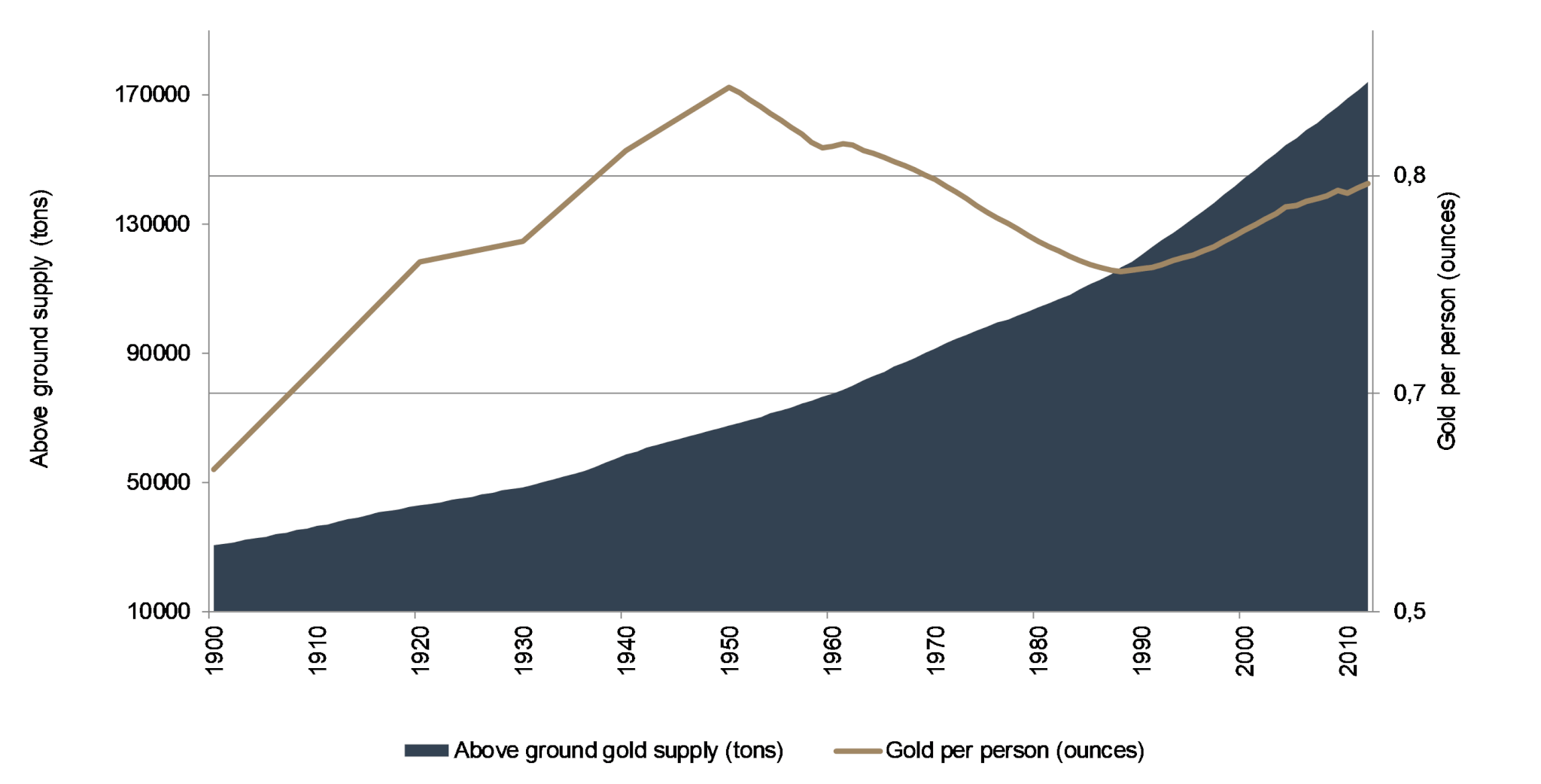 The gold supply curve only changes marginally. Scrap supply can be volatile, while mine production is highly inelastic. If one compares this to the supply curve of paper currencies, this is one of gold’s major advantages: governments can print currency at will. There is no difference between the (digital) costs of printing a 100 euro note or a 10 euro note. There is, however, a substantial difference between producing 100 ounces or 10 ounces of gold. The former takes exactly 10 times the effort.

The following chart illustrates this “relative scarcity”. The average annual growth rate (CAGR) of the US monetary base between 1917 and 2013 amounted to 7.17%. The supply of gold by contrast only increased by 1.52% per year. If one looks at the rate of change since the beginning of the new monetary era – i.e., since the end of the Bretton Woods agreement – the growth rate of base money is actually significantly higher at 9.95%. The gold supply by comparison grew only by 1.5% per year in the same time period. This relative scarcity is the main advantage of gold compared to fiat currencies. 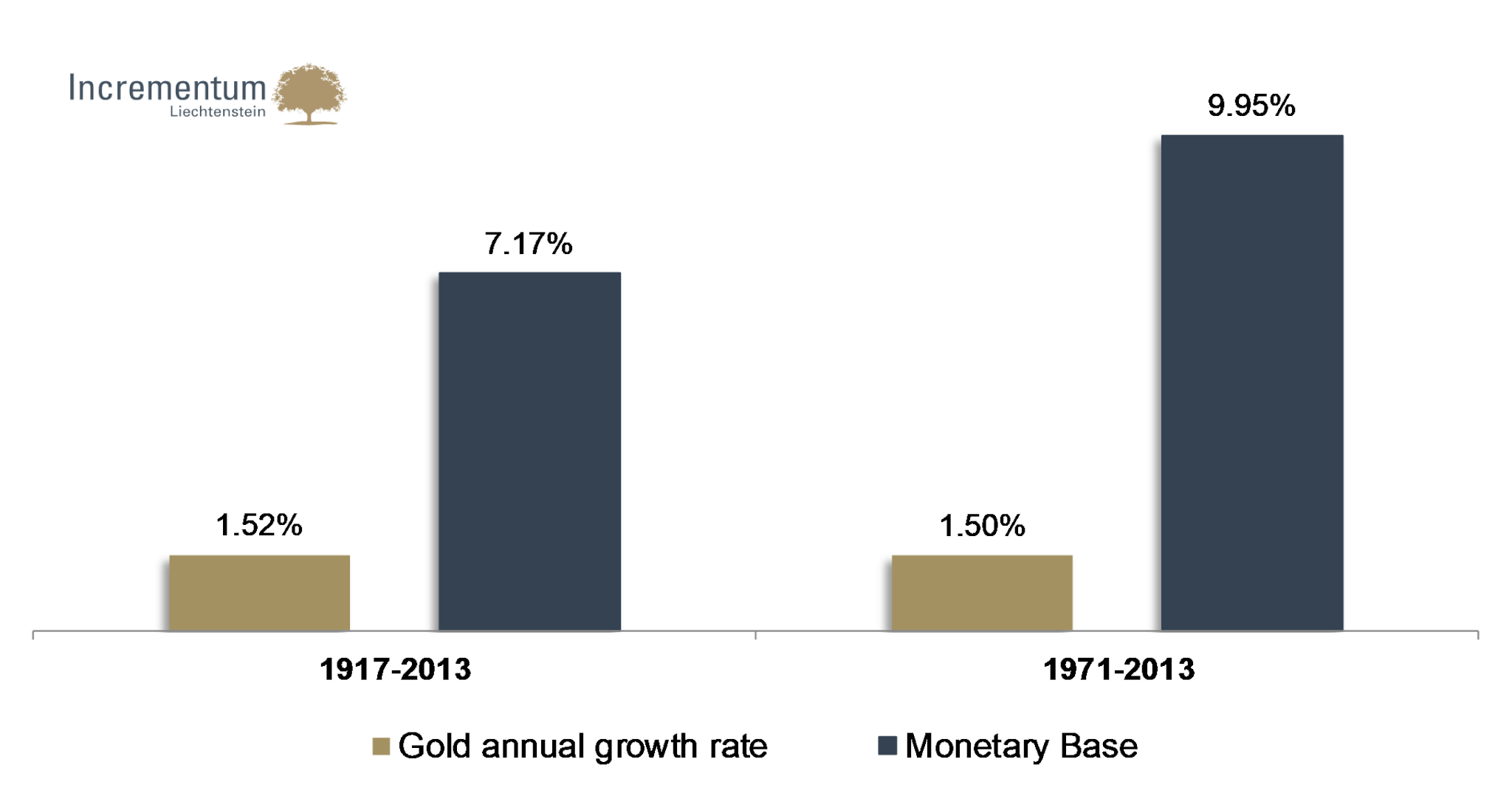 We have already discussed the crucial importance of the stock-to-flow ratio in our previous reports. Simply put, the ratio means that in the case of gold and silver – as opposed to other commodities – there is a major discrepancy between annual production and the total available supply (= high stock-to-flow ratio). As we stated last year, we believe that the permanently high stock-to-flow ratio represents one of gold’s (and silver’s) most important characteristics. The total amount of gold amounts to approximately 177,000 tons. This is the stock. Annual mine production amounted to roughly 3,000 tons in 2013 – this is the flow. If one divides the total gold mined by annual production, one arrives at a stock-to-flow ratio of approximately 59 years. The ratio expresses the number of years it would take to double the total stock of gold at the current rate of production.

The following chart shows the trend of the ratio since 1900. One can see that it fluctuates akin to a sine curve around a mean value of 66. 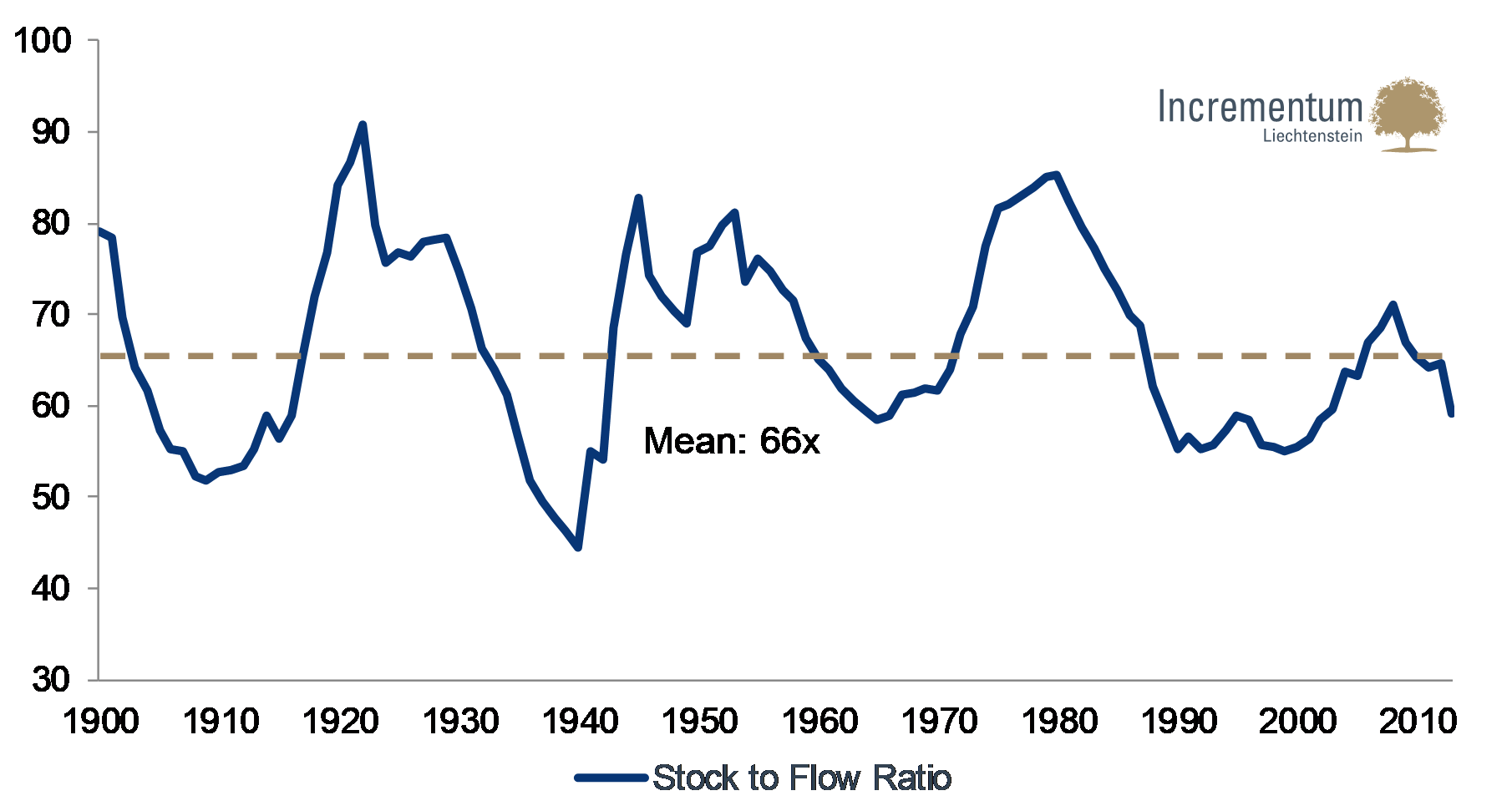 Silver’s stock-to-flow ratio by contrast shows a definite long-term trend. Until 1951 it rose, and has been falling ever since. 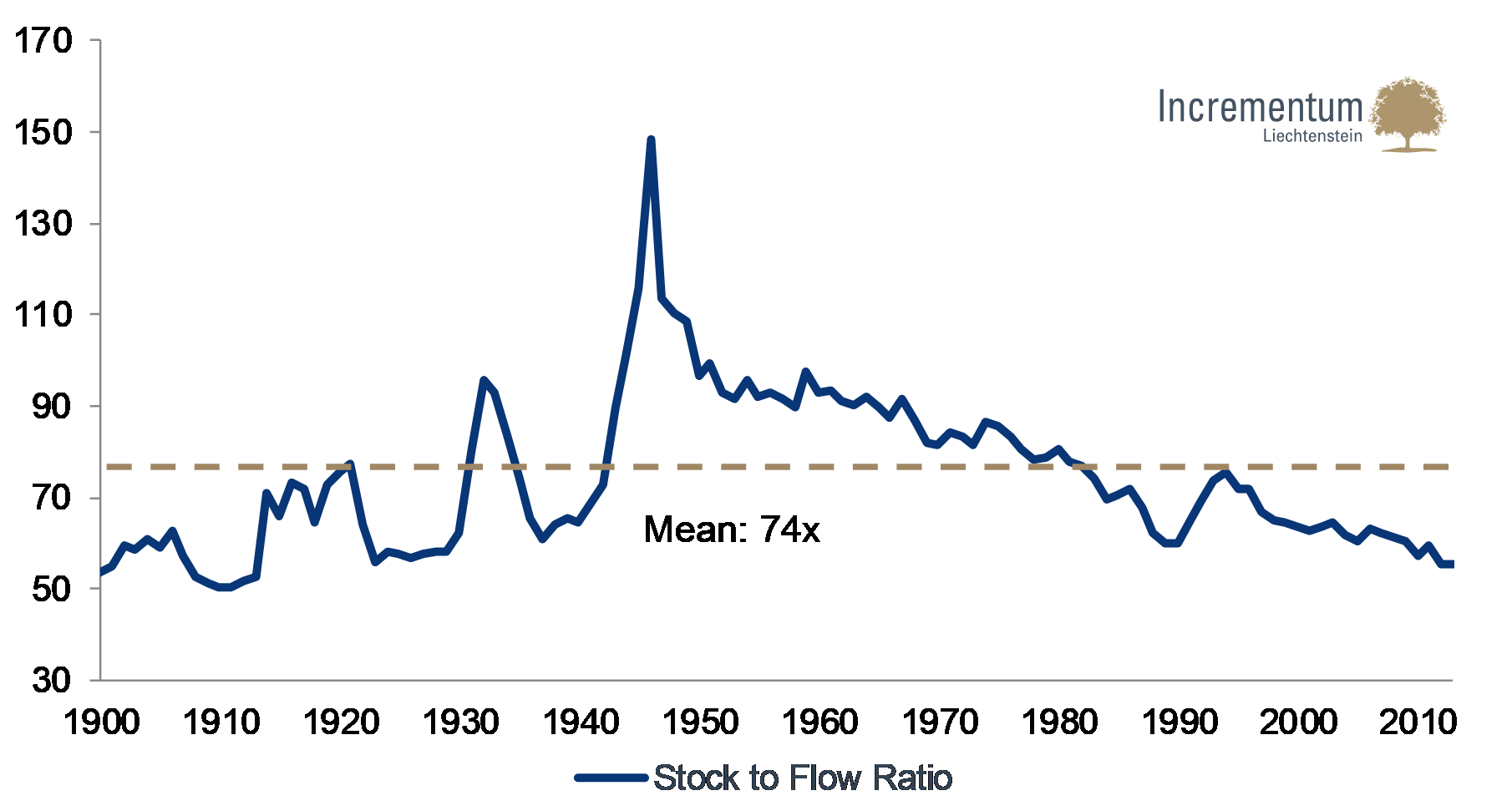 The monetary suitability of gold, silver and the US dollar

In order to quantify monetary serviceableness, we have determined three sensible values based on the stock-to-flow ratio for gold, silver and the US dollar which are shown in the following table:

the average absolute height of the StFR

the difference between the highest and lowest value of the StFR

the Median of the annual rate of change of the StFR

As the above comparison shows, the US dollar as a representative of fiat currencies has the worst values on terms of all three criteria. Especially the last two figures illustrate quite starkly why the dollar is not suitable to function as stable money. Gold by comparison proves superior in two cases, and is only bettered by silver in terms of the mean value. This confirms once again that gold is the primary monetary metal.

Since gold is not a consumption good, the tacit assumptions employed by nearly all gold analysts are not applicable. This has major implications regarding the validity of the bulk of mainstream gold analysis and will be discussed in more detail at this juncture.[3]

Why is it decisive that gold is not a consumption good? For one thing the supply of and demand for gold is not necessarily separable on an interpersonal level. Every gold owner can at any time enter the market as a seller, but also as a buyer. That may sound trivial, but it is a major difference to consumer goods, which are used up. One cannot usually expect that a market participant who buys a consumer good does so in the manner of a speculator based on certain expectations about future prices.

Consequently, there are usually largely separate groups of people involved in the buying or selling of specific consumer goods – producers sell them, consumers buy them.[4] Moreover, by consuming consumer goods, consumers deprive them of their function and need to acquire the goods concerned anew if they want to have the function at their disposal again.

What does this mean for the price determination of gold? The majority of gold analysts regard demand as the sole decisive influence on price determination and thus assumes that the decision of gold owners whether to sell their gold is solely determined by demand. Once a market participant has decided to buy an ounce of gold and agrees with a seller on the price, gold analysts determine gold demand based on the fact that a transaction has taken place. If this happens more often than in a previous time period, demand is said to have increased.

Should more trades have been recorded, many analysts conclude that due to “higher demand for gold” its price must rise. Is this even a valid conclusion? No, all that has happened is that the number of trades has increased. Whether this is due to a change in supply or demand cannot be stated. Such a statement would, however, be valid in the consumer goods area. If a supermarket always has a good available at a constant price over two similar time periods and sells more of it in the second than in the first time period, one can conclude from the statistically ascertainable sales figures that demand has increased.

Let us assume that as a result of a certain event, the preferences of market participants shift toward gold. Demand increases significantly in that case, but there doesn’t even have to be a trade, because the supply side also exhibits a stronger preference for holding gold, if for instance a currency reform is feared. As a result, there doesn’t even have to be a higher gold price evident, despite a massive increase in demand, if no one wants to sell their gold and no trade is recorded that would reflect the current market price.

The other confusing aspect of the gold price is that the supply is also not a number. Supply, like demand, is the willingness of buyers to offer a quantity of gold at a range of prices. Nearly all gold supply, in this sense, is an expression of the reservation demand for gold by the people who own it. The only exception to this are miners who are price takers. Because mine supply is so small compared to the existing gold, miners have minimal impact on price. They are for the most part price takers who sell at a price determined by the reservation demand of everyone else who owns gold.

The reason why people aren’t spending all their money today is that they exercise a reservation demand for money, expecting it to have greater usefulness to them in the future. Reservation demand is therefore essential for price determination. Due to gold’s monetary importance it is therefore also decisive in gold’s case who values it more highly: the new, incremental buyer, or the existing owner. The majority of gold analysts however concern themselves exclusively with “exchange demand” and therefore assume that the gold price can be predicted with a trivial consumption model. If one wants to quantify demand in this way, one must rely on the only available data in the form of the number of trades at specific prices. We believe that this can lead to significantly erroneous conclusions in the case of gold. The amount demanded and supplied must always balance at whatever price is determined in the market. Focusing on such quantities can however give us no information about past or future prices.

Every holder of gold is automatically on the supply side, since he is at any time a potential seller of gold. There will always be a price or a combination of prices and circumstances that will lead market participants to sell their gold. For some this will only be at a significantly higher price level, for others however also at a markedly lower price level (for instance due to a deflationary collapse). The decision not to sell gold at the current price level is therefore just as important as the decision to buy gold.

[3]We want to recommend the work of Robert Blumen on this topic, especially “Does Gold Mining Matter?”, “The Myth of the Gold Supply Deficit” and „What is key for the price formation of gold“.

[4] Merchants are excluded from this observation, since they fulfill an entirely different function and play no role in our analysis. They increase the marketability of a good in exchange for an agio. Their motivation is however neither consumption nor holding of the good.