Mises explains how money was created

The regression theorem that Ludwig von Mises postulated in “The Theory of Money and Credit” is a pivotal piece when it comes to our understanding of the monetary character of gold. It says that the expectation with regard the future purchase power of money depends crucially on the knowledge about today’s purchase power of money[1]. Today’s evaluation of purchase power in turn is derived from yesterday’s purchase power. If we continue this regression, we find that at the beginning of the process there has to be a good that was generally needed and had an industrial use. This means that money has emerged from a tangible good. This also includes the demand for jewellery and thus gold. According to Mises only those goods that have a generally accepted utility value can turn into generally accepted, natural money. Gold and silver were already used as jewellery before they assumed their monetary functions. According to Mises the past experience is the decisive factor for the future trust in monetary stability.

The trust in the stability and the future purchase power is essential for the value measurement of money. According to the regression theorem people only trust in money as long as it offers a certain degree of safety with regard to the future money supply and thus to the future purchase power. From our point of view, the high stock-to-flow ratio seems to play an important role in this context. In the following we want to discus this central and unique, and hitherto quite disregarded, feature of gold.

„A stock of anything has to be started at a moment in time. A stock of 170,000 tonnes does not just suddenly appear. At some point, long ago, the decision was made to begin to hoard gold. No one hoards something that will not hold its value over time. No one would put a dozen eggs or an iron bar in the back shed and expect it to have value fifty years later. The crucial point to understand is that when the original decision was made to begin to acquire and hoard gold, it must have already been regarded as a store of stable value over time, otherwise the decision to store it would not have been made.”

The most important feature of gold is definitely its extremely high stock-to-flow ratio. The aggregate volume of all the gold ever produced comes to about 170,000 tonnes. This is the stock. Annual production was 2,586 tonnes in 2010 according to the World Gold Council. That is the flow. Dividing the former by the latter, we receive the stock-to-flow ratio of 65 years. 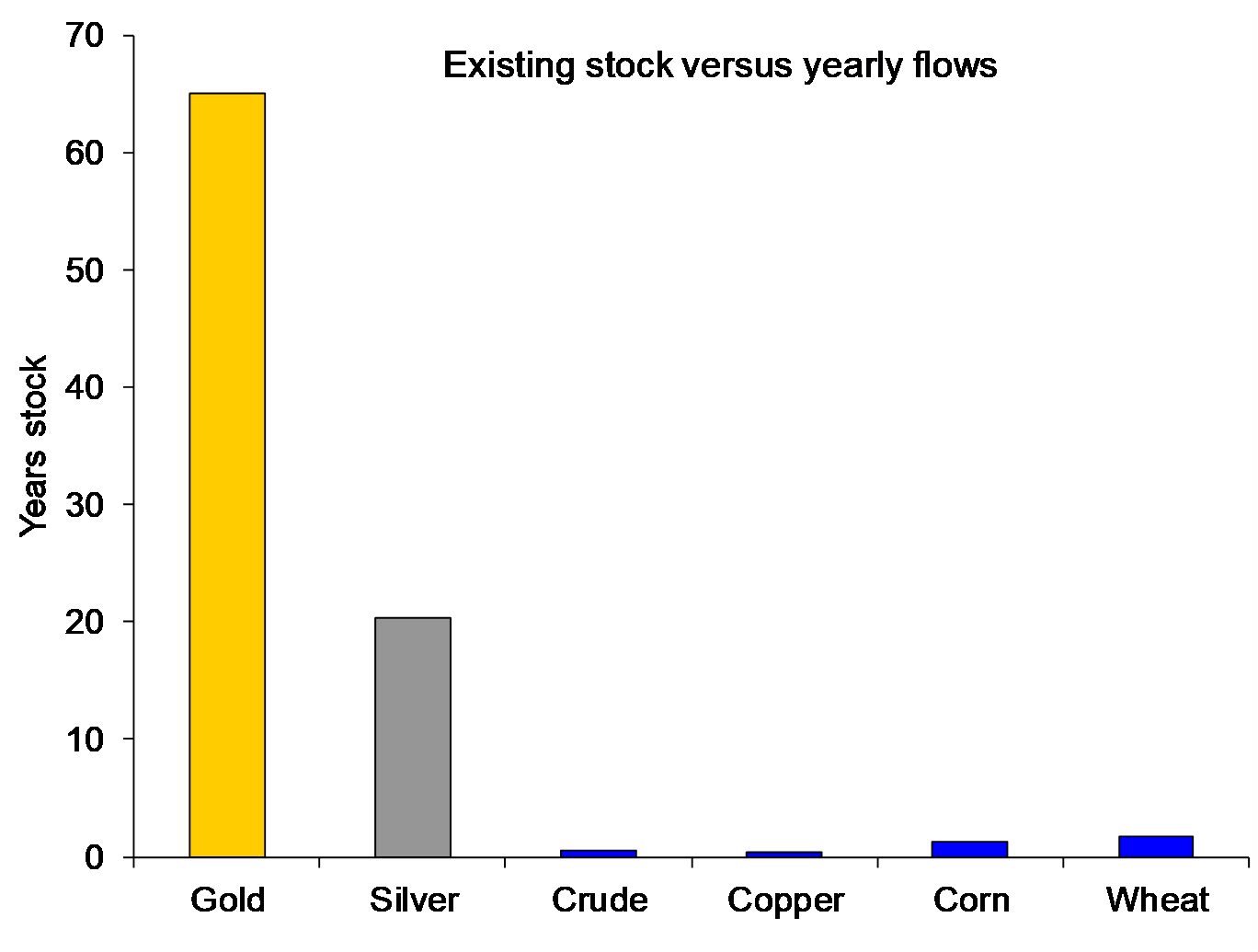 Paradoxically, gold is not scarce – the opposite is the case: it is one of the most widely dispersed goods in the world. Given that its industrial use is limited, the majority of all gold ever produced is still available. The recycling of existing gold accounts for a much larger share of supply than for other commodities. This is also why any significant production expansions or disruptions can be absorbed more easily. We therefore believe that gold is not that precious because it is extremely scarce, but because the opposite is true: gold is considered that precious because the annual production is so low relative to the stock. This feature has been acquired in the course of centuries and cannot be undone anymore.

Global gold reserves grow by an annual 1.5% and thus at a much slower rate than all the other money supply aggregates around the globe. The growth rate is vaguely in line with population growth. The trust in the current and future purchase power of money or any means of payment not only depends on how much is available now, but also on how the quantity will change over time. If mining production were to increase by 50% (which is highly unlikely), this would only translate into an annual increase of 3%. This fact creates a sense of security as far as the availability is concerned and prevents natural inflation. If production were down for a year, this would also have little effect on the overall situation. On the other hand, if the copper production were to be disrupted for an extended period of time, the stocks would be exhausted after about 30 days. For example, if a huge new mine were to come online and supply doubled, this would come with huge repercussions for the copper price, but with hardly any for gold. This stability and safety is a crucial prerequisite for the creation of trust. And it is what differentiates gold and silver as monetary metals clearly from commodities and the other precious metals. Commodities are consumed, whereas gold is hoarded. This also explains why traditional supply/demand models are only of limited use for the gold market.

These seem to be some of the reasons why central banks around the world hoard gold instead of copper or coal.

We have now explained why gold is no commodity, but rather a monetary good. Due to the high stock-to-flow ratio gold tends to be traded in contango. This means that the futures price is above the spot price. The last backwardation in gold dates back to2008, while silver was traded in backwardation in January 2011. In the case of backwardation, the market sends a signal as a result of which demand all of a sudden increases, and it makes no sense anymore from an economic point of view to bet on a later delivery date, given that the costs of storage, financing, and insurance would be higher. Backwardation is a clear sign of supply shortages.

We entertain some doubt about the alleged amount of 170,000 tonnes of above-ground stock. The figure is based on the calculations of a National Geographic article of 1998. Since then, practically all institutes, magazines, and analysts have based their models and assumptions on that figure. The conclusion of the article was that only 10,000 tonnes were produced in the whole 5,850 years prior to the California gold-rush. That amounts to only 1.7 tonnes a year which seems to leave a large question mark over the estimate[3].

On top of that we believe that almost 30% of annual gold production ends up in the private/black market rather than the official market. The volumes of artisan mining should not be underestimated, especially in Latin America, Africa and Asia. Therefore we entertain doubts about the 170,000 tonnes and we think it makes sense to at least question the figure and to entertain the idea that substantially more gold than claimed might be around. On the other hand, this would only add to the power of the stock-to-flow ratio of gold.

[3] Please refer to “The Dawn of Gold”, Philip Barton