In Bitcoin We Trust?

“Spend some time with Bitcoin. Learn it, challenge it, and use it. You can assume no government wants you adopting this system in any capacity, and for that reason alone it’s worth consideration by honest, moral, and industrious people.”

We want to sincerely thank Demelza Hays for contributing this chapter.

Biography of Demelza: Demelza Hays is a blockchain researcher at the Centre for Global Finance and Technology at the Imperial College in London, and she operates the only Bitcoin ATM in Liechtenstein. At the University of Liechtenstein, Demelza is completing her doctoral thesis on the role of cryptocurrency in asset management, and she teaches a course for bachelors and masters students on Bitcoin and the Blockchain technology. In partnership with Incrementum, Demelza is working on cryptocurrency research and a bitcoin-based investment fund.

After being ridiculed as money for computer nerds and a conduit for illegal activity, investors are finally beginning to take notice of bitcoin[1] and the underlying technology, the blockchain.[2] After 20 years of failed attempts at making a private virtual currency, Bitcoin emerged triumphantly out of the 2007/08 global banking crisis. The creator of Bitcoin, who is still unknown but goes by the pseudonym Satoshi Nakamoto, was determined to provide a decentralized, private, and secure means of transferring value online that did not rely on trusting sovereign entities, central banks, or financial intermediaries.[3] Although Bitcoin and the underlying blockchain were originally designed to replicate the traits of gold that make it uniquely suited to be money, Bitcoin represents a unique asset class and can be an integral part of wealth management from the perspective of portfolio diversification.

a. To Bitcoin or Not to Bitcoin?

Two years ago, Bitcoin was considered a fringe technology for libertarians and computer geeks. Now, Bitcoin and other cryptocurrencies, such as Ethereum, are gaining mainstream adoption. Bitcoin’s market capitalization of $36 billion has already surpassed the market cap of several fiat currencies such as Icelandic krónas and Guatemalan quetzals. In March of 2017, the price of bitcoin soared above the price of an ounce of gold for the first time. While gold was trading around $1,225, bitcoin jumped up to $1290.

Exchange Rates of Gold and Bitcoin against USD (Monthly Averages) 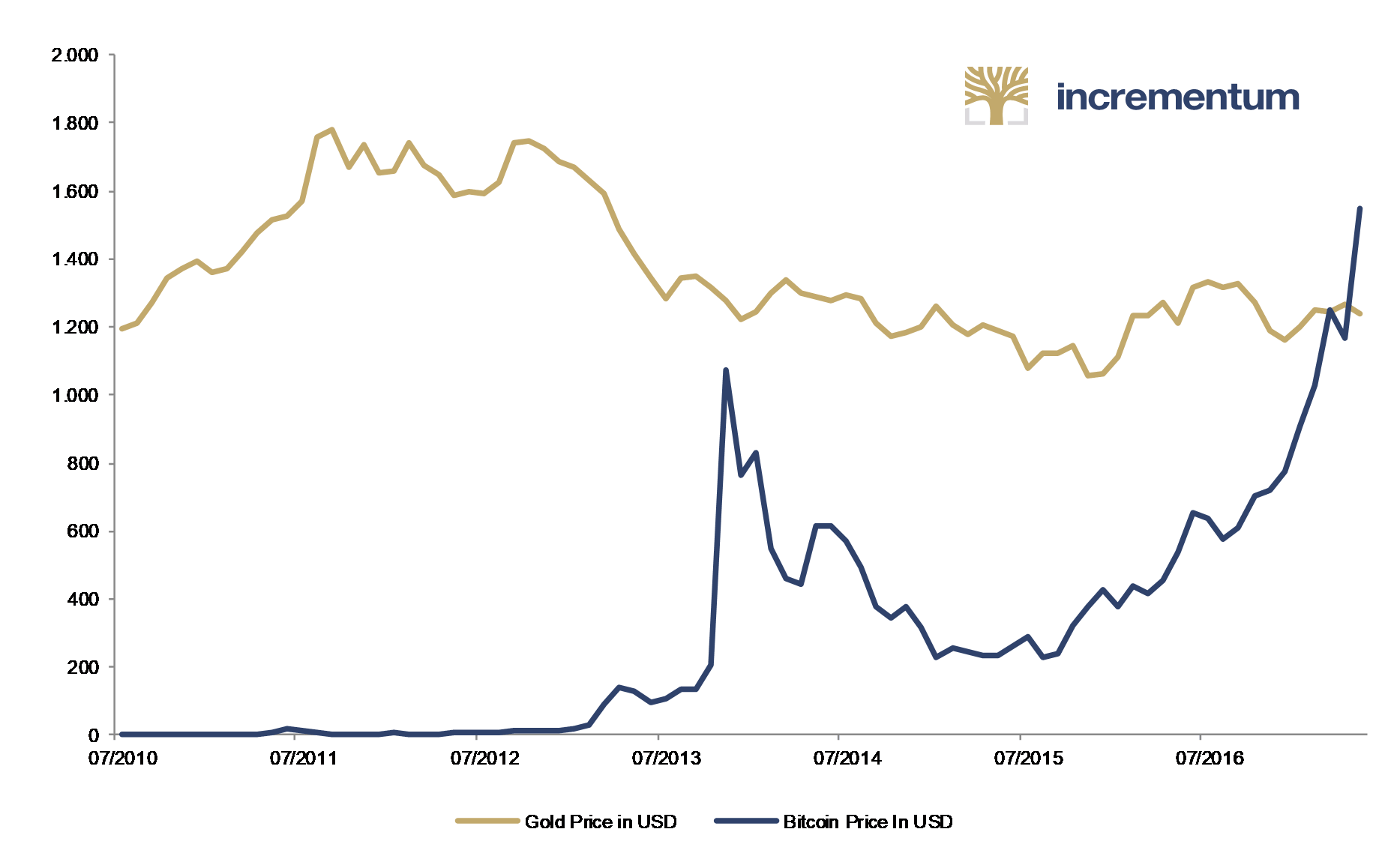 The price of bitcoin is determined in the same way as the price of all other goods: by the forces of supply and demand. However, bitcoin’s limited supply means that changes in demand directly impact the price, and as can be seen by the price of bitcoin, demand has been growing substantially. Demand is growing for two main reasons. Fundamentally, the technology provides a useful service to users who want to trade value across the world without an intermediary. Bitcoin transactions can be sent at any time of day, to any place in the world, for a transaction fee ranging from $0.00 to $0.40 regardless of the transaction size. Bitcoin’s growing popularity as a payment system can be seen by the increasing number of transactions. Every day, approximately 315,000 transactions occur worldwide with a volume of roughly $100 million.

Secondly, speculators are buying bitcoin in hopes of profiting from price fluctuations. However, the recent price hike to more than €2,400 per bitcoin has left investors wondering if it is too late to get in on the action. Despite the strong growth in the price, exposure to Bitcoin is still a good decision in 2017.

Like bitcoin, gold also provides protection from negative interest rates and fiat demonetization. Importantly, the stock to flow ratio (StFR) of bitcoin is similar to gold’s. Gold has a StFR of approximately 64 years, while bitcoin’s is approximately 25 years. The entire amount of bitcoin ever mined totals approximately 16.32 million. That is the stock. Every ten minutes, the network mints 12.5 new bitcoins. Therefore, there is a daily inflation of 1800 new coins. In 2017, annual production will be approximately 657,000 bitcoin. That is the flow. By dividing the stock by the flow, we can see that bitcoin’s StFR is lower than gold’s. The StFR shows that a large gap exists between the annual production of bitcoin and total supply available. Not only is bitcoin scarce but also the available stock is relatively constant over time, which generates confidence in the money.

The StFR of bitcoin is expected to rise further over time because every four years the amount of bitcoin minted every is halved. The last programmed “halving” occurred in June of 2016. Therefore, the next halving will occur in 2020. At this time, the StFR ratio will increase to approximately 56 years.[7] The StFR of bitcoin should surpass gold’s during the next five years. Figure 2 below shows the stock flow ratio of bitcoin over time. Prior to January 3, 2009, no bitcoin existed. Therefore, the stock to flow ratio was effectively zero. However, the rapid reduction in the amount of bitcoin mining over time is increasing the StFR. By 2024, only 3.125 bitcoin will be mined every ten minutes resulting in a StFR of approximately 119 years. 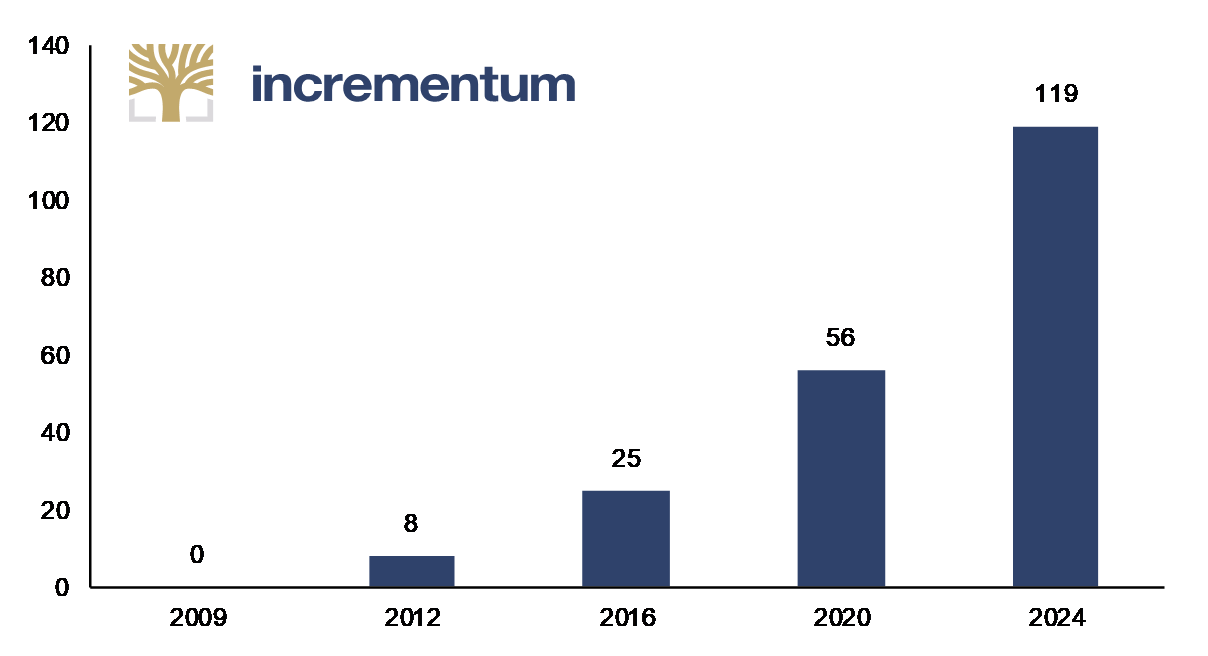 The inverse of this calculation, the inflation rate, shows that the stock of bitcoin is being increased by approximately 4% annually. The supply of newly minted bitcoin follows a predictable inflation rate. Satoshi modeled the flow of new bitcoin as a Poisson process[8], which will result in a discernible inflation rate compared to the stock of existing bitcoin by 2020.

The low and steady inflation rate of bitcoin is one of the most attractive features of this experiment in monetary technology. Like gold, decisions concerning the issuance of money and control of the money supply are not left in the hands of fallible humans. Bitcoin transfers this responsibility from humans to computers whereas gold relies on nature. Algorithmic or programmable money takes passive “digital money”[9] controlled by banks and governments and makes it active “virtual currency”[10] that is controlled by software protocols and cryptographic algorithms that are inherent to the currency itself.[11] 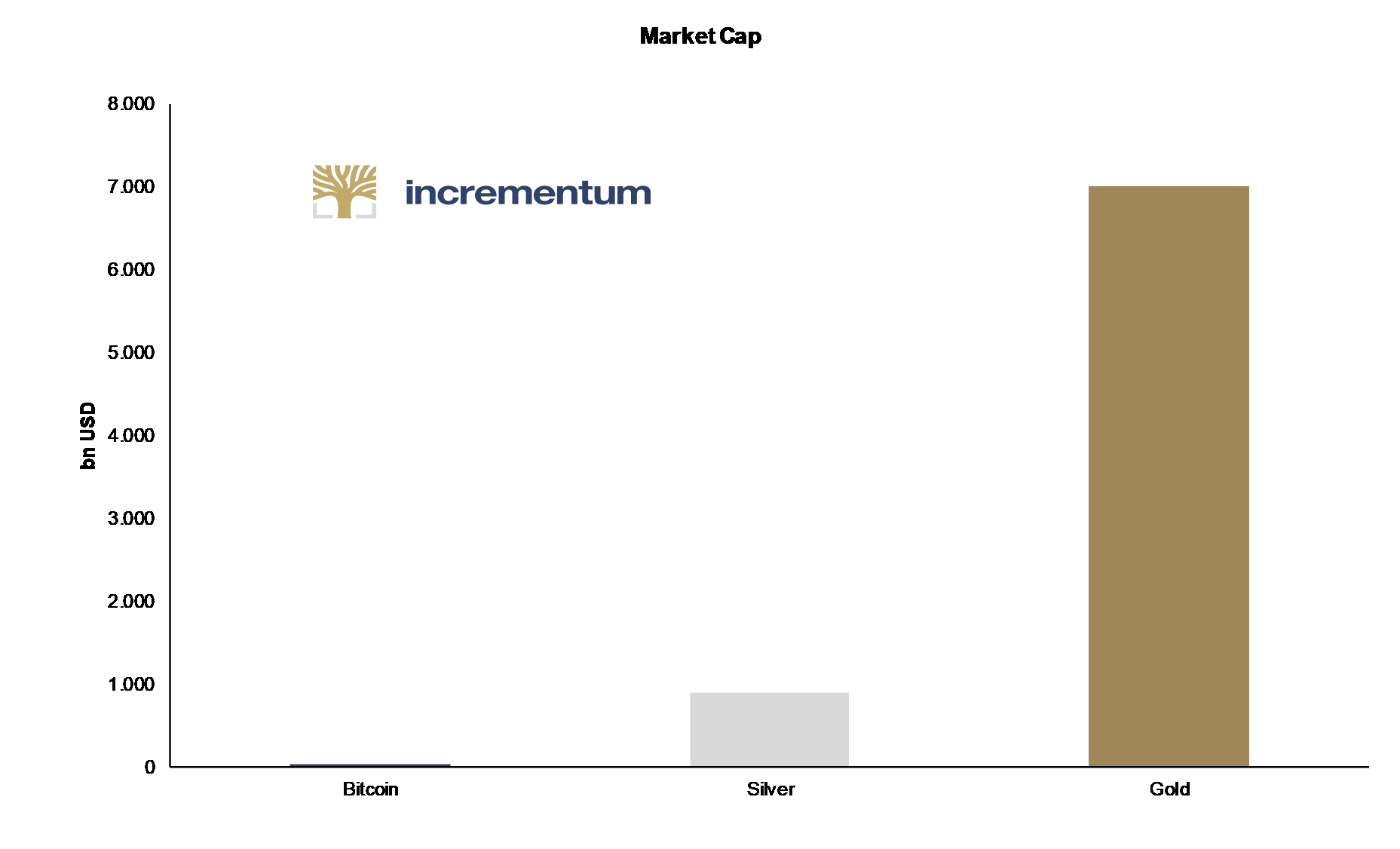 As money, bitcoin has three main advantages and four main disadvantages in comparison to gold.

Overall, Bitcoin and gold represent two distinct asset classes – and should be treated as such by investors. The medium-term outlook for both of these classes is positive because they are both deflationary monies that allow investors to counter expansionary fiat currencies and artificially low interest rates. Future generations may store gold while employing a cryptocurrency as a medium of exchange or cryptocurrency may even replace gold as the best vehicle for wealth accumulation if debasement or expropriation of gold becomes widespread. However, buyers beware: A growing body of academic research recommends 2-4 percent of a diversified portfolio should be in Bitcoin[15] compared to up to 20 percent that may be invested in gold. Bitcoin faces several hurdles; however, this nascent technology may provide a glimpse of what will eclipse our current system of fiat currencies.

At Incrementum, our interest in bitcoin and cryptocurrencies has evolved from a mere curiosity to a legitimate investment case. Due to the lack of institutional grade investment vehicles for bitcoin, Incrementum has begun working on a cryptocurrency investment fund. Official news about the cryptofund is expected to be released in the third quarter.

[1] The concept of Bitcoin is written with a capital B while bitcoin, with a lower-case “b” refers to the monetary unit. Therefore, bitcoin is the cryptocurrency used on the Bitcoin network.

[2] Also referred to as the distributed ledger technology (DLT)

[6] As noted by John Maynard Keynes (1921), and later Daniel Ellsberg (1961), the Ellsberg Paradox describes a situation in which people prefer to bet on the outcome with a high level of known risk compared to an unknown risk.

[9] “Digital money is electronic money or in other words so called fiat money stored electronically i.e. money in bank accounts in various currencies like Swiss Francs, US Dollars, Euros, etc, used to make payments. When you pay cash into your bank account it becomes digital (electronic) money for you.” Kremeth. 2016. Incrementum.

[10] According to the ECB virtual currencies, such as bitcoin, are, “a type of unregulated, digital money, which is issued and usually controlled by its developers, and used and accepted among the members of a specific virtual community.” European Central Bank. 2012. Virtual Currency Schemes.