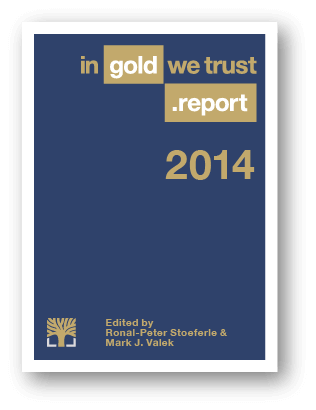 We are currently on a journey to the outer reaches of the monetary universe. We believe that the monetary experiments currently underway will have numerous unintended consequences, the extent of which is difficult to gauge today. Gold, as the antagonist of unbacked paper currencies, remains an excellent hedge against rising price inflation and worst case scenarios.

Monetary policy does not work like a scalpel, but like a sledgehammer. The tug-of-war between a deflationary debt liquidation and politicallyinduced price inflation is well and alive. Last year we coined the term ”monetary tectonics” which describes the battle between these powerful forces.

In our opinion, it is by no means certain that inflationary forces will win the race. However, socio-economic incentives and high indebtedness clearly suggest that in case of doubt, higher inflation rates will be tolerated. Should the inflation trend reverse, there would be excellent opportunities in inflation sensitive assets like gold, silver and mining equities.

In the course of last year’s price collapse, a lot of technical damage was inflicted. The past months have seen a significant decline in speculative activity in the sector. The majority of bulls appear to have thrown in the towel. We like the fact that the consensus considers the gold bull market over. Gold is now a contrarian investment.

The migration of gold demand from West to East is continuing. The growing importance of Asia’s middle class for gold demand is widely underestimated. Assuming that incomes in China and India will continue to rise, gold will inevitably be one of the beneficiaries of this “love trade”. Gold stocks clearly exhibit a highly asymmetric risk-reward profile at present. In the wake of the correction, mining companies have reset their priorities – profitability, capital spending discipline and shareholder value have replaced the maximization of production. Moreover, there is no other sector that investors view with similarly pronounced scepticism.

From a technical perspective, our assumption is that the gold price is near the end of its long consolidation period. The clearly positive CoT data and the recent revival of gold mining shares all suggest as much. We are therefore convinced that the technical picture has been repaired and that a stable bottom has formed.

Our 12-month price target is the USD 1,500 level. Longer-term, we expect that a parabolic trend acceleration phase still lies ahead. In the course of this event, our long-term target of USD 2,300 should be reached at the end of the cycle.