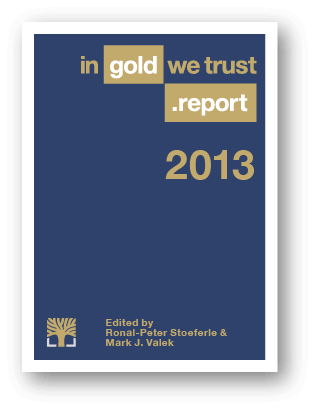 Even though the consensus is convinced that the gold bull market has ended, we remain firmly of the opinion that the fundamental argument in favor of gold remains intact. There exists no back-test for the current financial era. Never before have such enormous monetary policy experiments taken place on a global basis. If there ever was a need for monetary insurance, it is today.

In the course of the recent gold crash, the market has once again demonstrated its tendency to maximize pain. Massive technical damage has been inflicted. We are convinced that repairing the technical picture will take some time. Accordingly $1,480 is our 12-
month target.

We think that the correction that began in September 2011 exhibits strong similarities to the mid cycle correction of 1974 to 1976. That phase was similar to the current one, especially with respect to the marked disinflation backdrop, the presence of rising real interest rates and extreme pessimism regarding gold-related investments.

Since 2008 there have been more than 500 interest rate cuts around the world. Non-standard monetary policy measures seem to have become standard procedure. Tapering and exiting from QE might be more difficult than market participants currently envision.

The gold mining industry is currently going through a major period of change. It appears as though the industry is in the process of altering its priorities. We believe that the new commitment to transparent cost reporting, greater financial discipline and shareholder value is a crucial – if quite late in coming – insight by the sector. From a sentiment perspective, gold mining stocks are probably “the ultimate contrarian play”.

This gold report is the first in which we offer a quantitative model of the gold price. The model justifies a considerable risk premium to the current price, although only small probabilities of occurrence of extreme scenarios have been factored in. Based on our conservative assumptions, we arrive at a long-term price target of $2,230.

Due to the clearly positive CoT data as well as extremely oversold conditions, we assume that a bottoming process will soon begin. Regarding the sentiment situation, we see anything but euphoria in gold. Skepticism, fear and panic never signal the end of a long term bull market. We therefore judge that our long-term price target of $2,300, first stated several years ago already, continues to be realistic.