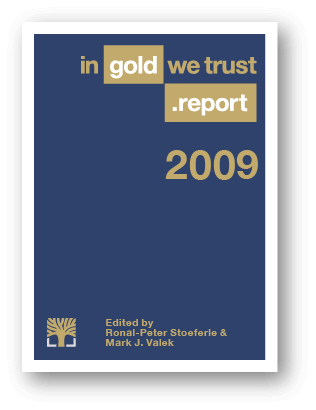 Since our initial recommendation in 2007 at USD 650, gold outperformed almost every other asset class. The gold bull market has been running with an annual performance of 16% since 2001. Gold closed the year 2008 with the eighth annual increase in a row. And in the year to date, the performance has been outstanding as well: the gold price has recorded an increase of 7% (in USD) and 8% (in EUR), respectively. The average price in 2008 was USD 872/ounce, i.e. 25% higher than in 2007 (USD 695).

But are we after the gold rush already? It is a legitimate question to ask whether we are facing an imminent trend reversal or if the recent correction was nothing but a “little breather” ahead of the next massive upward swing. What could be a potential catalyst to the continuation of the gold rush? What are the risks? In the third edition of our annual special report on gold we would like to discuss why we believe that the gold sector still offers a “shiny outlook” for existing and potential investors.

The strongly expansive policy followed by the central banks and the resulting money creation at historic levels as well as the massive expansion of government debt around the globe might make inflation literally the problem of the coming years. In conjunction with the almost worldwide zero-interest policy and the rising criticism regarding the US dollar as global reserve currency, in our opinion this situation offers a perfect basis for further increases in the gold price.

Many a market participant expected an exploding gold price due to the panic-stricken and turbulent events last year, and ended up disappointed by the performance. But even the collapsing oil price or the rallying US dollar failed to put a lid on the gold price. Gold outperformed most other investments both in absolute and in particular in relative terms. On top of that, gold set new all-time-highs in the euro, the British pound, the Canadian dollar, the South-African rand, the Russian rouble, the Indian rupee, and many other currencies.