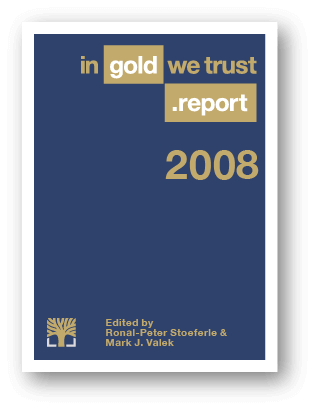 The first chart of the report is a prime example of the impressive performance of highquality gold shares even in a volatile market scenario. This cross section is not just a list of top-performers, but the result of the objective selection of gold mining shares that have shown to perform clearly above average over a long period of time. Since we rated the industry environment very favourably in our previous gold report of May last year, some of these shares have already been on our weekly recommendation list for months. This latest gold report will now illustrate in detail why the sector should remain attractive for a good number of years more. This sector analysis provides the interested investor not only with a comprehensive body of know-how as basis for decision-making in the gold sector, but also with various additional and extraordinarily attractive investment ideas.

Since our previous gold report of May 2007 the gold price increased from USD 670 per ounce to beyond the infamous USD 1,000 per ounce threshold, meaning that the yellow precious metal exceeded its nominal all-time-high of USD 850 per ounce of 1980. On 17 March a new high was set at USD 1,034. Since then the price has corrected considerably, but in a long-term perspective this has been an overdue and technically necessary correction within the setting of a secular bull market. However, at USD 2,300 per ounce the inflation-adjusted high is still a long way off.

The current gold rush is based on a number of factors: One of the most important ones is the falling confidence in the American economy. The subprime crisis has developed into a liquidity and credit crisis and subsequently grown into a confidence crisis and a crisis of the system itself. The chronically weak dollar, the credit crisis originating in America and concerns over strongly rising inflation and the exploding growth of the money supply have caused the investors to feel uneasy and channel billions of funds into precious metals. Whereas gold investments had been ridiculed as “relic for cowards” until very recently, their stability and safe haven features were appreciated in the event. The Financial Times for example headed one of its articles on 7 January 2008, “Gold is the new global currency”. This did come as a surprise, seeing that FT had traditionally been quite critical on gold. After what started out as US property crisis had developed to a global financial crisis leaving marks on the real economy, the US central bank had no option but to react by massively cutting rates. This has led US real interest rates onto negative ground, which should form a base for further increases of the gold price.