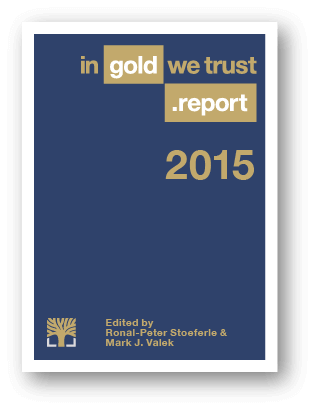 Little has changed with regard to the factors affecting the gold price. Yields on government bonds are low and the opportunity costs of holding gold accordingly remain negligible. Several central banks are currently engaged in QE-programs and are trying to weaken their currencies. Technical analysis shows that the bottoming phase of the past several years hasn’t concluded yet. For the next twelve months we are forecasting a price range of approx. USD 1,200 – 1,250.

In the course of the last years, much speculation in the gold sector has evaporated. This can e.g. be seen in the large decline in ETF holdings – it now appears as though practically all market participants have lost faith in gold. After strong outflows in 2013 and 2014, the exodus appears to have ended. For the first time since Q4 2012 net inflows into gold ETFs were recorded in Q1 2015.

What is quite remarkable is the current divergence between actual gold price performance and the largely negative perception of many market participants. While gold moved sideways in dollar terms last year, the bull market resumed in nearly every other currency. One can also see that in euro terms a gain of 12.10% and in yen terms a gain of 12.30% was achieved. Since the beginning of the year 2015, gold did very well, too. In EUR terms gold is up 8% ytd.

Rising interest rates = declining gold price. This is a widely held opinion. Although there is statistically a negative correlation between the Federal Funds rate and the gold price, we nevertheless advise caution. Three of the largest upwards gold moves of the post 1971 era occurred in rising nominal rate environments.

US stocks are trading at generous valuations in comparison to historical levels. When a mean reversion occurs, gold’s characteristics as a portfolio hedge will come to the fore. As is always the case with insurance, it is better to have it and not need, than to suddenly find out that one needs it and doesn’t have it.

The steadily growing importance of Asian emerging markets with respect to gold demand is in our opinion widely underestimated. We regard a doubling of Asia’s gold demand over the coming decade as realistic, even likely.
Further important arguments that argue in favor of investing in gold: