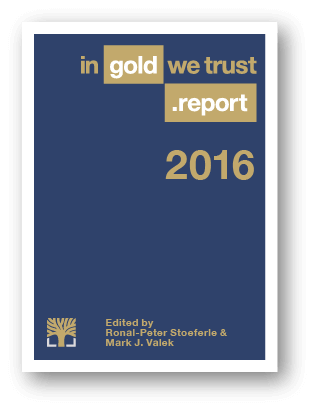 Gold is back! With the strongest quarterly performance in 30 years, the precious metal in Q1 2016 emerged from the bear market that had been in force since 2013. A decisive factor in this comeback is growing uncertainty over the recovery of the post-Lehman economy. After years of administering high doses of monetary painkillers, will the Fed succeed in discontinuing the practice? Or is the entire therapy about to be fundamentally questioned?

Generating growth and inflation remains the imperative of monetary policy. The systematic credit expansion required for this just doesn’t want to get going. Even the ECB, which initially acted with restraint after the financial crisis, is nowadays stuck in a perennial loop of monetary improvisation and stimulus. General uncertainty has now increased even further after the surprise outcome of the Brexit referendum.

After years of pursuing low interest rate policies, central banks have maneuvered themselves into a lose-lose situation: Both continuing and ending the low interest rate regime harbors considerable risks. In an attempt to finally achieve the desired boost to growth, a monetary Rubicon has been crossed in several currency areas with the imposition of negative interest rates. Gold is increasingly attractive in this environment. It used to be said that gold doesn’t pay interest, now it can be said that it doesn’t cost interest.

As a last resort, even the radical measure of helicopter money is considered these days. As the flood of liquidity has hitherto primarily triggered asset price inflation, newly created money is now supposed to be injected into the economy by circumventing the banking system in order to boost aggregate demand. It seems realistic to expect that such a windfall would indeed ignite the much-coveted price inflation. Whether it will be possible to put the genie back into the bottle once it has escaped is a different question.

An exit from the Fed’s monetary emergency programs has been announced for years in the US. This, together with the perception that the economy was recovering, led to a strengthening US dollar in recent years. Commodities and gold weakened as a result. So far, the actual extent of the normalization of monetary policy consists of the discontinuation of QE 3 and a single rate hike by 25 bps.

The US economic expansion appears to have run its course already. Should the rate hike cycle that has been initiated fail, a significant loss of confidence in the central bank’s policies and with it the USD appears likely. This would go hand in hand with rising commodity prices and a return of inflation and would represent a “perfect storm” for gold.

We believe the time for investing in inflation-sensitive assets has come. Apart from gold, silver and mining stocks offer very interesting opportunities. After several years of drastic adjustments, it is likely that mining shares will once again exhibit strong gold price leverage.

According to our perception the events of the past year are validating our views and we are maintaining our gold price target of USD 2,300 by June 2018.