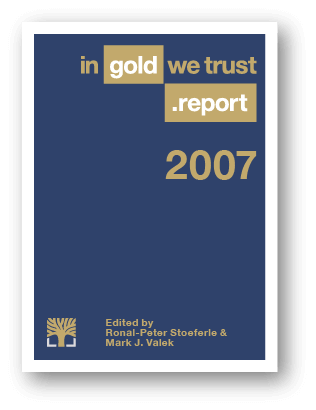 Gold is a chemical element and a precious metal. The chemical symbol for gold is AU, which is derived from the Latin name aurum. Since the beginning of recorded history, the yellow metal has held a special attraction for people and was often the cause of wars and conquests. Gold was one of the first metals worked by humans, because it is found in nature as an element and can easily be alloyed with other metals and processed mechanically very well.

In the past, gold has been used as a currency, i.e., one unit of money corresponded to a certain amount of gold. For a long time, one ounce of gold was the equivalent of USD 20.67 in the United States. Under the Bretton Woods system, the parity was raised to USD 35. On 17 March 1968, the gold price was finally split and changed into a two-tier system. One price was permitted to adjust freely to the market, while the other one was fixed. During the period that gold served as a reserve currency, private ownership was partially prohibited in the US. Thus, from 1933 to 1975, it was only permitted to invest in jewellery and coin collections, while the purchase of bullion and investment coins was prohibited. Over the course of time, gold lost its significance as a currency and developed into a commodity. New functions were defined for gold as a good, as a commodity for industry, science, medicine and for jewellery production as well as an investment asset.

The gold market is different from other commodity markets, because a considerable part is bought for investment purposes (e.g. hedging against inflation) and thus gold is a commodity as well as a monetary asset. Furthermore, gold is not depleted and can be returned to the market. The melting point of 1063 degrees Celsius and its high chemical consistency make it practically indestructible and therefore almost all gold ever mined still exists. Moreover, it is the most malleable of all metals and can be hammered out thin into a leaf only a thousandth of a millimetre thick or drawn out into a thread of 105 km (per ounce). A characteristic of gold is also its high electric conductivity and for this reason, it is used in electronic products of all types.